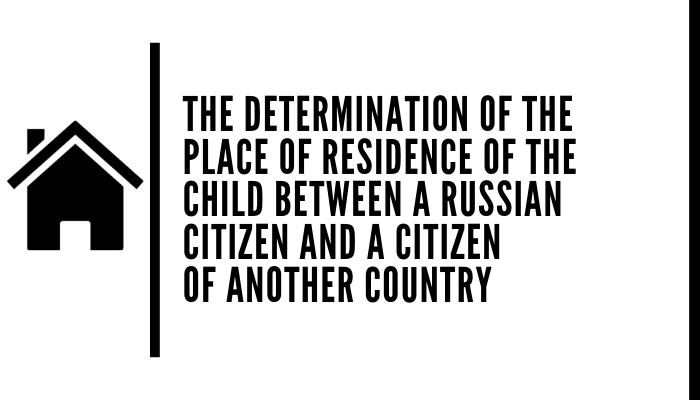 I would like to draw your attention to the fact that there is a big difference between such legal institution as “the determination of the place of residence of the child between the parents of the child in Russia” and “the return of the child back to the country of his/her residence.” The first situation concerns the relationships of the parents when they reside in the territory of Russia. For example, a citizen of Italy remained to live in Russia with his wife, later they had a baby. The second situation is when a parent, a citizen of Russia, kidnaps the child and leaves a foreign country coming back to Russia without the consent of the other parent of the child.

In this article, we consider the first situation according to the Russian legislation without applying to international law.

The child is not a thing

With the mother by default

Please, consider one important moment. Usually, at the time of divorce, the child issue does not arise straight away. A claim for dissolution of marriage states that there is no “dispute about the children; the children stay with the mother.” Let’s say, this is a common pattern of the statement of claim used in the Russian court. If the other party objects, it may apply to the court with the corresponding claim. It appears, that the Russian justice system takes the side of the mother rather than of the father.

If there is no agreement, you need to apply to the court

Family Code of the Russian Federation offers the parties the opportunity to resolve the dispute peacefully by signing a relevant agreement. Applying to the court is an extreme measure. However, if there is no agreement between the biological parents, then one of the parties submits a statement of claim to the court to determine the child’s place of residence.

The main work on the protection of rights in court occurs at the preparatory stage. The plaintiff will need to prove a number of very important circumstances on the basis of which the court will make a decision. Therefore, you should know what you must prove and how you should do it.

The circumstances to be proved in the court

When determining with whom the child will stay to live, the good moral character of the parent is crucially important. First, the psychological health of both parents is determined. For this purpose, the appropriate requests to a narcological and a psychoneurological health centers are made to determine whether the parent is on file or not.

The next important question is whether the parent of the child can independently on medical grounds look after and take care of him/her. Does the parent have any chronic diseases which prevent him/her to care for the child? To clarify these circumstances, the request to the parent’s assigned hospital is made.

Problems with the law.

When making a decision, the court takes into account whether the parent was subjected to administrative and criminal liability, and if so, for what violations. Of special importance are such offenses as crimes against children. To clarify these circumstances, the request is made to the information center of the Department of Internal Affairs of Russia (police).

Characteristics of the parent.

In the Russian Federation, various organizations can give the citizen’s characteristics. To do so, the requests are made to the local police officer, to the local building-utilities administrator offices, to school, to work, to a medical facility. I would say more, even the neighbors can give the characteristics. For this, they can be questioned in the court as witnesses.

The financial situation of the parents.

For the adequate parenting, not only the psychological climate in the family is important, but also the financial situation of the parent. Such circumstances as the salary of the parent and the presence of his/her own home are very important. However, it should be noted that this is not essential in determining the child’s place of residence. Even if the child’s parent does not have an apartment, a good job, and salary, this will not be an unconditional basis for determining the child’s place of residence with the parent who is wealthier. These circumstances are optional.

The relationship between the parent and the child.

If the child is ten years old, the court asks his/her opinion, with which parent he/she wishes to live. The child’s examination is done by the Child Protection Services, teachers and psychologists.

Analyzing the Russian established practice in applying to the law, it can be concluded that to determine the place of residence of the child with the father of the child is difficult. This is especially true for a citizen of a foreign country. However, a foreign person has the same rights as a citizen of the Russian Federation. Therefore, a foreigner has the right to file a statement of claim to the court, and defend his/her rights. However, note that it is more difficult for a citizen of another country to defend his/her position.

Declaring the marriage contract as invalid in the Russian Federation

A Couple's Property in Russia After a marriage registration, the spouses acquire property either from…

Four reasons to get a divorce in Russia

The first thing that comes to mind is the time of case consideration in court.…